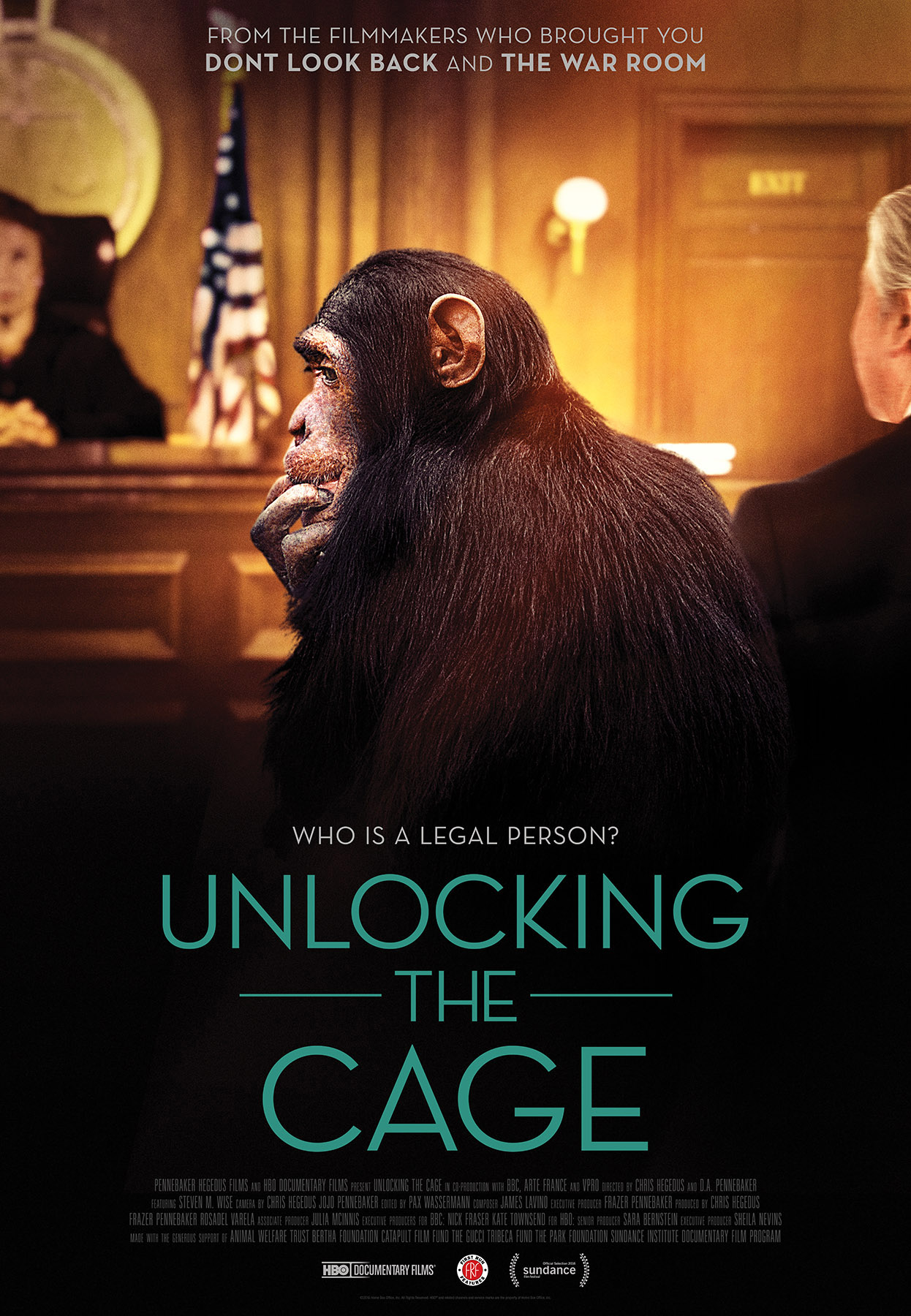 Under the law, animals are considered objects or “things” rather than sentient intelligent beings with rights. Although repeated scientific studies have shown the complexity of animals’ intelligence and their emotional lives, animal welfare laws still fall short of protecting them from confinement, cruelty, abuse, and basic rights. Unlocking the Cage is a smart and brilliantly edited documentary following animal rights lawyer Steven Wise, founder of the legal team Nonhuman Rights Project (NhRP) in their efforts to break down the legal walls that separate non-human animals from humans. Filmmakers Chris Hegedus and D.A. Pennebaker (The War Room, Don’t Look Back, Kings of Pastry) embarked four years ago on this effectively-paced movie which mixes interviews with courtroom footage, short clips of animal abuses in various situations, and interviews with experts and scientists. Unlocking The Cage is suspenseful, unfolding like a thriller as we follow the legal team in their search for captive chimpanzees living in solitary confinement in the state of New York and follow the evolution of the lawsuits they file on behalf of four of the surviving seven they manage to locate.

Inspired by Peter Singer’s book “Animal Liberation,” Steven Wise has dedicated himself to animal justice for over thirty years. NhRP’s objective in bringing lawsuits on behalf of the four chimpanzees is to transform in the eyes of the law, an animal from a “thing” with no rights to a “person” with legal rights. Using writs of habeas corpus (historically used to free humans from unlawful detention), Wise and his team try to establish that animals with complex cognitive faculties such as apes, cetaceans and elephants, should be granted “personhood” status which will no longer render them invisible to the law and the protections it grants. One of the chilling moments in the movie is when Wise comments: “These animals are extraordinarily cognitively complex. So when you imprison a chimpanzee, the chimpanzee understands that tomorrow he is gonna be in prison and as far as he knows, it’s not gonna end.”

It is interesting to note that a “person” in the eyes of the law, is not necessarily a human being. In fact, while “personhood” over history has been granted to humans, i.e. women and their rights, slaves, children, fetuses, it has also been granted to certain corporations (such as Citizens United) and some non-living entities. It continues to be a topic of international debate and has been questioned critically during the abolition of human and currently non-human slavery.

Some of the most interesting moments in the film are the courtroom scenes where we witness the dialogues between Wise and the judges who struggle with the unprecedented habeas corpus writ in relation to non-human animals and its ramifications, claiming that there are other ways in which animals can be helped. Wise points out that just because it has no precedence, does not mean that it should remain so. “The Great Writ is a powerful tool subject to expansive interpretation” says Wise, as the law evolves according to scientific discoveries and evolving social situations. In fact, as he puts it, we are “on the cusp” of something new. While we might ask why not make animal welfare laws more effective and binding, this would still leave non-human animals according to Wise “on the other side of the wall that separates legal ‘persons’ from legal ‘things’.”

“We are trying to bring at least one of these species of animals on the ‘person’ side of the wall and have one animal’s fundamental interests protected through legal rights,” says Wise. “At that point we think we are going to catalyze a reevaluation of the law and its relation to non-human animals. How far, how broad and how deep that would go, who knows?” This is the intentional and fundamental “step one” strategy that will hopefully lead to further steps. It is inspiring and heroic to say the least, and brilliant of Wise to have recruited the talented Hegedus/Pennebaker team to bring this issue to the attention of a wider audience.

Two hundred years ago, slavery, child labor, the lack of women’s rights, the exploitation of workers, and other injustices were taken for granted until they were challenged. We look back upon them now as cruel and unjust. We are at the dawn of a critical era where many of us are looking back at our treatment of non-human animals as barbaric, unnecessary and outdated. And we need people such as Steven Wise and his team and the makers of Unlocking The Cage to champion such a cause.

Unlocking the Cage is currently screening in theaters. For more information about the movie and playdates, visit: https://firstrunfeatures.com/unlockingthecage_press.html

You can find more information about the Nonhuman Rights Project here:

THE MUSIC OF STRANGERS: YO YO MA AND THE SILK ROAD ENSEMBLE OPENS IN THEATERS ON JUN 10TH.