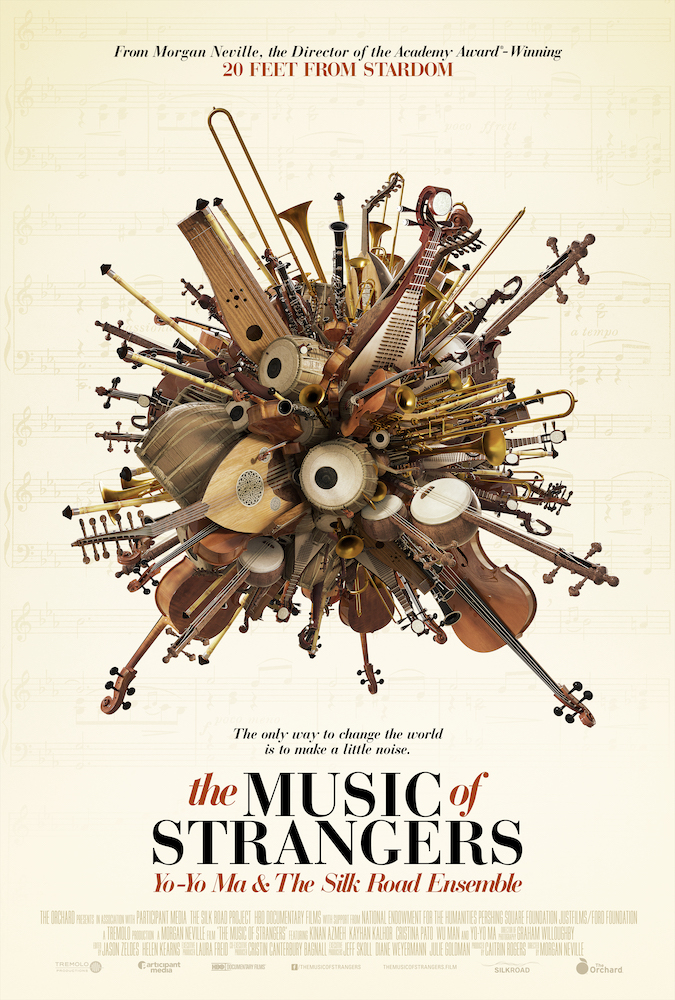 THE MUSIC OF STRANGERS  IS A DEEPLY ENGAGING MOVIE EXPLORING THE STORY OF YO YO MA AND THE SILK ROAD ENSEMBLE. ITS COMPANION CD SING ME HOME, IS A TESTIMONY TO THE BEAUTY OF CROSS-CULTURAL COLLABORATIONS.

“Every tradition is the result of successful invention… Human beings grow by being curious and receptive to what’s around them. A lot of people are scared of change, and sometimes there’s reason to be fearful. But if you can welcome change, you become fertile ground for development.” Yo Yo Ma

This is just one of the many insightful quotes from the movie The Music of Strangers: Yo Yo Ma and The Silk Road Ensemble. This outstanding music documentary by Oscar-winner Morgan Neville (Twenty Feet from Stardom, Best of Enemies), follows the musical journey of legendary cellist Yo Yo Ma and the international collective of virtuosi and wondrous musicians he founded, The Silk Road Ensemble. Ma “fell” into the classical music career because of his prodigious gifts made apparent early in his life. Despite success and fame, from early on, Ma has always been on a quest to connect deeper with other musicians from different traditions in his search for that universal language that creates change. Inspired by the exchange of ideas and traditions along the historical Silk Road, he established The Silk Road Ensemble in 1998 to explore how the arts can advance global understanding. In 2000, a unique collective of global artists met at Tanglewood in the Berkshires. “We started as a group of musicians getting together and seeing what might happen when strangers meet.” Although not all of them spoke good English, they all spoke “good music language.” These outstanding musicians came from a wide variety of countries, ranging from the United States, to Spain, Iran, Syria, Japan, India and China, among others. This could have been just a one-off experience had it not been for 9/11, the following year which made it all the more imperative for the group to continue playing together, touring, giving workshops, and forging bridges among people across the political, racial, cultural and religious divides. Despite criticisms of diluting the music and making it into cultural tourism, the musicians believed in the power of their ideas, desired to learn from each other, share their musical language, and interestingly found that the collective was also a vehicle to connect back to their roots and preserve their culture. As Ma puts it so elegantly: “No tradition can evolve without invention, otherwise it gets smaller.”

Although rich with interviews (including Tan Dun, Osvaldo Golijov, Bobby McFerrin, John Williams and other Silk Road members) and mesmerizing live performances, the movie focuses on four of the core members (besides Ma obviously): Chinese pipa (four-string plucked instrument) player Wu Man, Galician exuberant powerhouse gaita (Galician bagpipes) player Cristina Pato, Syrian clarinetist Kinan Azmeh, and Persian kamancheh (spike fiddle) virtuoso Kayhan Kalhor. They all have successful solo careers, but playing in the Silk Road Ensemble has greatly impacted their lives. Filmmaker Morgan Neville explains: “One of the reasons we chose musicians from these countries is that they are or have been in danger of having their cultures erased. In countries that undergo cultural revolutions, it is common for artists to be silenced, to be marginalized, jailed, exiled or worse. Art gives people hope. It asks them to think for themselves. It does a lot of things that can be threatening to repressive governments.”

Their personal stories at the heart of the film, we learn about the life experiences of each of these musicians – some extremely tragic – and understand the uniting thread that connects them besides their love of music and playing together: that music gives them a higher purpose and brings them closer to understanding who they are and how we are all connected. As Ma puts it: “I’m always trying to figure out at some level who I am and how I fit in the world, which is something that I think I share with seven billion other people.” The theme of exile is poignantly expressed when Kalhor wonders who writes the scripts of revolutions which are all the same and affect people the same way? Kinan Azmeh asks: “Where is home? Where you grew up? Where you want to die? Where you want to contribute to without having to justify it?”

As much as the film is about endangered cultures, it is also about re-rooting and finding one’s voice although as Azmeh puts it: “Once you think you’ve found your voice, it changes again.”  Perhaps the person who best describes the Silk Road Ensemble and its vision in just a few words is Wu Man who says: “To me, the world is one. There is no East/West. It’s just a globe.”

The live concert footage ranging from solos, duets and full ensemble performances are so vivid and beautiful that we find ourselves wanting to hear more. Fortunately the ensemble has made six albums. The latest, Sing Me Home was released in April 2016 on Sony Masterworks. Although it is the companion CD to the movie, it is not its soundtrack. The album features special guest performers Martin Hayes, Toumani Diabaté & Balla Kouyaté, Shujaat Khan, Rhiannon Giddens, Abigail Washburn, Gregory Porter, and Bill Frisell, among others. Produced by Silk Road Ensemble member Johnny Gandelsman and Grammy Award winner Kevin Killen (U2, Kate Bush, Elvis Costello, David Bowie), Sing Me Home consists of original and traditional tunes that are either composed or arranged by members of the Ensemble and the guest artists, who bring their individual interpretation to the ever-changing idea of home. The result is a beautiful and deeply moving collection of music from different cultures coming together that breathes freshness and speaks to the rich cultural heritages of China, the Balkans, Ireland, Mali, Japan, Syria, India, Iran, and the United States.

The Music of Strangers: Yo Yo Ma and The Silk Road Ensemble opens in theaters on June 10th.

The Silk Road Ensemble with Yo Yo Ma will be at the Hollywood Bowl in Los Angeles on Sunday, August 21st at 7 PM:

For further information on the Ensemble’s calendar, please visit: