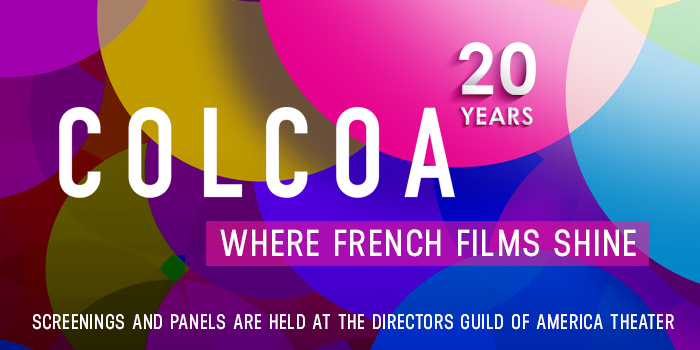 THE 20TH COLCOA (City of Lights City of Angels) FRENCH FILM FESTIVAL, 9 DAYS OF FILM AND TV PREMIERES STARTS ON MONDAY, APRIL 18 THOUGH THE 26TH BOASTING A PARTICULARLY DIVERSE AND STRONG PROGRAM.

One of my favorite film festivals is COLCOA known for its diversity and excellent programming. The Festival, now in its 20th year, has steadily grown and is now the world’s largest event dedicated to French film-making. I had the opportunity to attend a few pre-festival screenings and every single film I saw was noteworthy. COLCOA will open this Monday with MONSIEUR CHOCOLAT, a biopic about the first French black clown, starring Omar Sy. The feature film selection includes 40 features and documentaries and 21 shorts, plus there will be two TV series and five TV movies.  Here are just a few of the recommended movies:

The provocative film DON’T TELL ME THE BOY WAS MAD, goes beyond the Armenian genocide as it explores the irreparable damage that is wreaked upon peoples and communities in the face of unreconciled crimes, a topic that is very pertinent today and speaks to the cycle of violence that is shaking the world.

AS I OPEN MY EYES is Tunisian filmmaker Leyla Bouzid’s impressive debut about a young girl who defies her family and society to pursue a singing career on the eve of the Tunisian revolution. The double standards vis-à-vis women are deftly portrayed, while the atmosphere of fear under former President Ben Ali is subtly felt throughout the movie until it reaches its peak when the protagonist (superbly acted by Baya Medhaffer) is arrested and detained for singing songs that denounce the lack of freedom.

One beautifully-crafted animation with a brilliant soundtrack screening this year at the festival is LONG WAY NORTH. It is the story of a fifteen year old Russian girl who embarks on a dangerous and brave adventure to the North Pole to find her grandfather’s ship.

But if you had to pick one movie to see, let it be the documentary TOMORROW, which provides a comprehensive look at solutions undertaken by activists, governments and ordinary citizens to make the world a greener and more sustainable place. Beginning with extremely grim conclusions regarding climate change, overpopulation, lack of food and water within only a short span of twenty years, and the threat of mass extinction, the film then embarks on a globetrotting expedition to show how scientists, entrepreneurs, farmers, teachers, local governments, and ordinary citizens are tackling the situation with viable and highly effective solutions. The strength of the movie is precisely its search for palliative answers which leave us feeling empowered and fire us with the desire to roll up our sleeves and do something about our dire situation. From Detroit where urban farming is providing food for the local population; to Bristol, UK with its own currency the Bristol pound, which preserves the money spent locally in the community instead of disappearing into the hands of international banks; to permaculture in France; to  the highly efficient recycling system in San Francisco; to Copenhagen where 70% of the energy comes from non-fossil fuels; to Kuttambakan, a small village in Tamil Nadu, where the progressive mayor shares decision-making power democratically with all the villagers; each example attests to the fact that situations can be reversible, if there is a will and some creative problem-solving. Imbued with humor and hope, this is a required movie for anyone who cares about saving our planet.

For further information about the festival, please visit www.colcoa.org