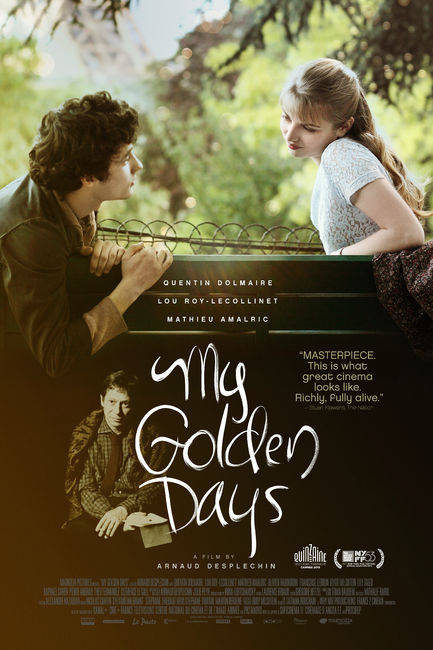 MY GOLDEN DAYS: ARNAUD DESPLECHIN’S LATEST MOVIE IS A BEAUTIFUL TALE OF LOVE AND COMING OF AGE SHOWCASING THE IMPRESSIVE TALENTS OF NEWCOMERS QUENTIN DOLMAIRE AND LOU ROY-LECOLLINET

OPENING IN NEW YORK AND LOS ANGELES ON FRIDAY MARCH 18

Love takes on totally different proportions in teenage years. As with everything else in life, politics, philosophy, questions regarding one’s identity, the meaning of existence, the mystery of mortality, it is felt more acutely, and in an all-encompassing and serious way.

French director Arnaud Desplechin (“A Christmas Tale,” Kings & “Queens”) expresses deep insight and sensitivity in his latest movie “My Golden Days” (Trois Souvenirs De Ma Jeunesse), a nostalgic prequel to his 1996 humanist serio-comedy “My Sex Life… Or How I Got Into An Argument,” where the characters are in their thirties. But you don’t need to have seen the latter in order to fully understand and enjoy Desplechin’s latest.

A wistful tale of adolescence told in three parts (the French translation of the title literary means Three Memories Of My Youth), this is a perceptive coming of age story. Paul Dédalus (played by Mathieu Almaric), the main character in My Sex Life…, now an anthropologist, reminisces about the early period in his life (wonderfully portrayed by Quentin Dolmaire)  as he prepares to return to France after long years of living abroad. In a series of flashbacks, he recalls his childhood struggles in Roubaix with his mother’s mental illness and his father’s depression, his memorable trip to the USSR where he gives (“loses”) his passport to a young Russian Jew trying to escape the Soviet regime, and in the third installment…  Esther.

In this part, Paul reflects back on his university years as a financially strapped student and his return to his hometown where he meets the beautiful, haughty and straightforward Esther (played by the luminous Lou Roy-Lecollinet), the first love of his life. The relationship is a passionate one and far from being easy. Esther is a complicated and “all or nothing girl” who is also courted by others; she appears very sure of herself but in reality she is vulnerable, lonely and very sensitive, hiding behind a cool façade that is at times brutal.  Before Paul, her sense of self has come mainly from seducing boys and engaging in short-lived relationships. She starts to discover her true self through her relationship with Paul, which is not just based on sexual chemistry but on a true exchange. Neither she nor Paul have had the loving foundation in their childhood and in a sense become one another’s source of sustenance and validation. However, their romance gets seriously challenged by Paul moving away to study in Paris. Their long-distance relationship remains kindled through phone calls, passionate letters, and the occasional brief visits, their hearts aching from the absence of the other. It is a period of acute longing (especially for Esther) who is left behind and does not have strong ambitions to study.  For those of us old enough to remember, we cannot help but feel nostalgic for a pre-internet era where we still made phone calls and wrote letters.

The performances are nuanced, vivid, and utterly realistic and natural. The lovers’ chemistry is palpable and electric, and their connection, that of the idealism, naiveté and inexperience of youth. Brilliantly acted by all ⎼ Almaric in his sixth collaboration with Desplechin, and Dolmaire and Roy-Lecollinet particularly shining in their first movie roles, this is a marvelous and evocative movie, deep and resonant, yet full of humor and never taking itself too seriously.

June 26, 2016 UNLOCKING THE CAGE MOVIE REVIEW Under the law, animals are considered objects…

November 18, 2015 Set in a small village on the Black Sea coast, accentuating the…