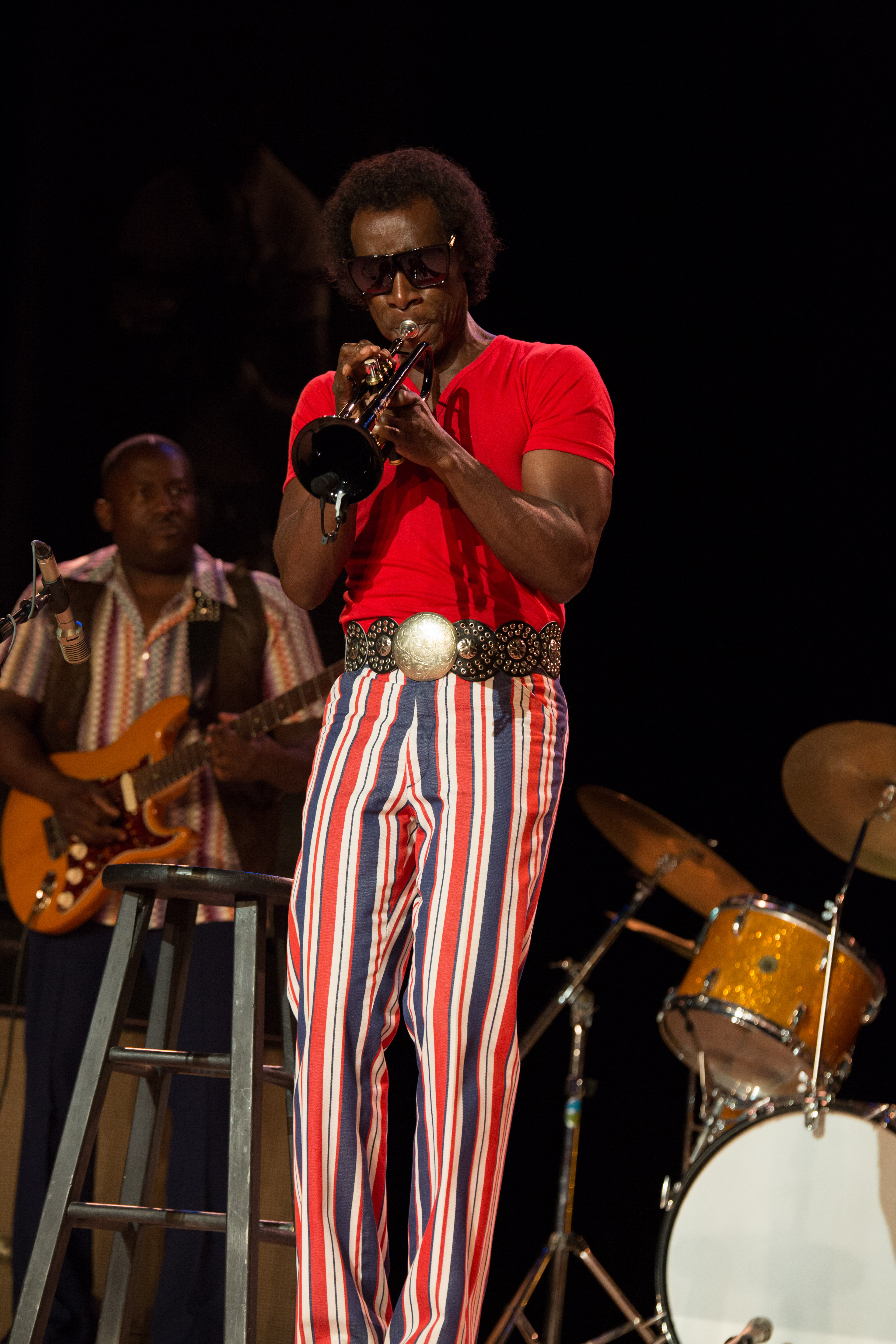 Shortly after jazz legend Miles Davis was posthumously inducted into the Rock and Roll Hall of Fame in 2006, Don Cheadle was approached by his family to do a movie on him. They had already decided that if anyone were to portray the trumpeter, it would be Cheadle. According to an article in Daily Variety, at the time of the induction ceremony, his nephew and a producer on the movie, Vince Wilburn Jr. was asked if a Miles Davis film was in the making. Unbeknown to Cheadle at the time, Wilburn had said “Yes, and Don Cheadle’s going to play him.” Steeped in Miles’ music since the age of ten, Cheadle played the alto sax when young. He would listen to jazz musicians and try to figure out how they played. Originally, intended to only act the part of Miles Davis, Cheadle was not entirely satisfied with the various proposed storylines and ended up directing the movie as it was easier to implement his vision.

After years of setbacks, including lack of financing and actors’ limited windows of availability, we finally have Cheadle’s directorial debut, endorsed by the Davis family, with himself in the electrifying role of the musician. A truly independent movie, MILES AHEAD, is an impressionistic take on the life of the musical genius inspired by the events in his life during the late ‘70’s when he went through a five year hiatus and creative block. Rather than a conventional linear informational biopic, Cheadle envisioned Miles as the star of his own movie, similar to Bob Fosse in All That Jazz, and wanted the movie to be more an experiential impression of the musician. Instead of focusing on the chronological events in his life and the musicians with whom he played (although they are featured), the focus of the movie is on the pain of a highly prolific artist going fallow.

Living in seclusion in his home in 1979, Miles is beset by chronic pain from a deteriorating hip, numbed by cocaine, alcohol and pain killers, his musical voice stifled, and his mind haunted by events and ghosts of the past. There are many reasons why Miles’ musical career came to a standstill by the end of 1975. Besides serious health issues, continued hostility from critics who rejected his electronic music, and plain exhaustion, Miles was also dealing with personal demons. The main story revolves around his memories of his failed marriage to the beautiful dancer and his muse Frances Taylor (Emayatzy Corinealdi), a period during which Miles produced some of his greatest works such as Someday My Prince Will Come and Sketches of Spain. Plagued by infidelity, abuse, and Miles’ deteriorating mental and physical health, the eight-year marriage came to an end when Frances was forced to flee for her own safety. In the movie, Miles grapples with loss and regret not only for Frances as the love of his life, but also as the metaphor for his lost voice and silenced creativity. He lives a fantasy heist involving a shrewd music reporter (Ewan McGregor) with whom he sets off on a wild and dangerous chase to recover the stolen tape of his latest composition. The lost tape represents the loss of his relationship to his music and the character of Junior (Lakeith Lee Standfield) whom he meets along the way and who finally leads him back to his artistic salvation, echoes his younger self (Miles was given the nickname “Junior” by Charlie Parker and Dizzie Gillespie) and his relationship with his own complex past.

With never a dull moment, this innovative biopic is full of raw energy that moves forward (just as the musician always did) until Miles finally faces the harsh reality he had suppressed: that what led to the destruction of his marriage and contributed eventually to his creative emptiness was his own abusive behavior and self-destruction. The ever versatile Cheadle gives an Oscar-worthy performance, embodying Miles to perfection ⎼ mercurial, intense, complex, dangerous, with attitude, limping gait, exact body language, high-pitched raspy voice, even learning all the trumpet solos for the performance scenes in the movie. With additional music by Robert Glasper, Cheadle decided to use music from all the periods in Miles’ career and let the storytelling dictate what piece of music would be utilized for each scene.  It is important to know about Miles and his life in order to fully understand the movie because nothing is underlined and the story is metaphoric. But even if you don’t know anything about the jazz great, you will be greatly entertained.

The final concert sequence is not an actual Miles Davis concert but features older musicians that Miles used to play with like Wayne Shorter and Herbie Hancock, as well as younger performers like Esperanza Spalding and Gary Clark Jr., just the sort of group that had he been alive, he would have probably put together.  And just as Miles was never scared of taking risks and pushing the envelope, MILES AHEAD does the same, taking it as far as it can, while remaining true to the spirit of the genius who not only created great music but who gave his musicians the space to grow and find their own voices.