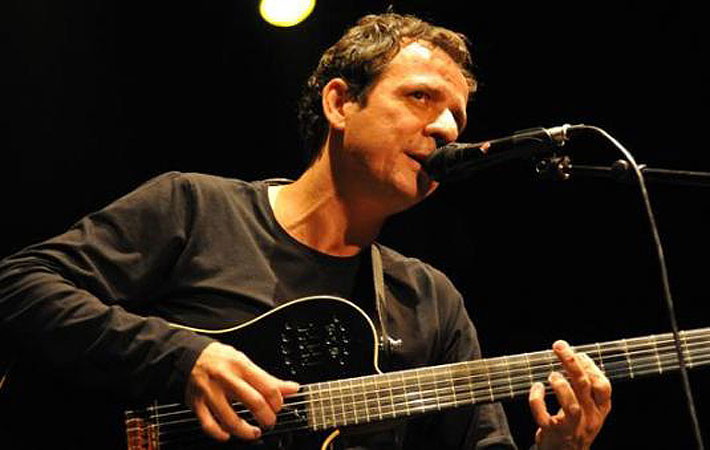 Brazilian singer/songwriter/guitarist Márcio Faraco has a unique brand of Brazilian music that speaks to the soul. Lacking affectation, we are struck by the sincerity of the songs, simple yet profound, poetic and delicate, beautiful and timeless. For me, he is to Brazilian music, what Antonio Zambujo (another deeply soulful singer/composer) is to Portuguese music. In fact, they create magic when they perform together

Acclaimed by critics and embraced by the public, his first solo album “Ciranda” (Universal Music) sold over 60,000 copies worldwide and established him as one of the most creative and original voices in MPB (Música popular brasileira). This recognition came late into the life of someone who had started playing guitar at the tender age of ten and embarked on a professional music career at fifteen.  Born in Alegrete in southern Brazil, Faraco comes from a family where everyone either played guitar or piano. In his early twenties, he moved to Rio and then to England and the south of France, where he played the vast repertoire of Brazilian music as well as his own compositions, trying to eke a living, experiencing many hardships along the way, but persevering in his passion and true vocation. The breakthrough came in 1997 when Chico Buarque, recognizing his amazing talent, championed him. After the release of “Ciranda,” things started happening very fast, leading to six more albums and regular international touring.

With a soft and melodious voice, Faraco explores the various rhythms of his native land with songs that are intimate and poetic. In a conversation with him from his hotel room in Santa Cruz, Faraco told me that there are guitars in every corner of his home, posed to be picked up in anticipation of new melodies. He has maintained his connection to Brazilian culture and the Portuguese language by returning regularly to his native land. “Our accent determines a lot of what we do,” he says, “so now that I am living in France, I have also acquired a French (musical) accent.” This accent is quite audible in his latest CD “Cajueiro” (Cashew Tree) on The World Village label (Harmonia Mundi). The accordion, played by Lionel Suarez, plays a major role in most of Faraco’s eleven songs exploring rhythms from different regions in Brazil, from samba to milonga and xote and even one song with a Gypsy jazz rhythm. Faraco says that he chose the title to his album because of the cashew tree’s symbolism. Being the most Brazilian of the fruit trees, it symbolizes the unity of the Brazilian people despite the mélange of people, races and cultures; by the same token the rhythms performed on “Cajueiro” are all Brazilian by essence despite their diversity.  As for the inspiration for the lyrics, Faraco says that they can vary from musings and occurrences in daily life to things he reads and events that leave strong impressions on him. “Quo Vadis” (Where are you going? in Latin), on “Cajueiro,” was inspired by images of the horrific public execution of Muammar Gaddafi. Faraco says that although Gaddafi was a tyrant and criminal, by executing him, the jubilant crowd did onto a terrified man (even though a murderer) what he had done to others, and humanity instead of moving forward took steps backwards, because it behaved like him.

Faraco performs in the US and Canada with his brilliant quartet featuring Lionel Suarez on accordion, Gerson Saeki on bass, and Julio Gonçalves on percussion. For further information regarding Márcio Faraco and his tour dates, go to: www.marciofaraco.com.

October 28, 2015 HOPSCOTCH: THE INDUSTRY’S MESMERIZING NEW MOBILE OPERA “Imagine getting in a car…

Cameroonian bassist, vocalist and multi-instrumentalist Richard Bona is a true gift to the world of…